The skin has an outer protective layer known as keratin. The thickening of this outer layer is what is referred to as hyperkeratosis.

This thickening of the skin’s outer layer is usually a measure to protect itself from rubbing, scratching, and other forms of irritation on the skin surface that cause corns and calluses especially in the hands and feet. 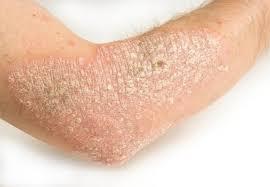 It can be whitish spots in the mouth as well. Other forms of the disease can manifest as part of the skin’s defence mechanism in case of:

Only on a few occasions does hyperkeratosis occur on the un-irritated skin. These particular type of hyperkeratosis may be part of an inherited trait from parents, and that manifests soon after birth. There are many examples of hyperkeratosis that affect large areas of the body. They include:

These are small bumps on the skin’s surface caused by the human papillomavirus (HPV). Other types of warts known as plantar warts develop onto the soles of the feet. Usually, HPV is transmitted through contact typically by touching or shaking hands with an infected person. It can also be transmitted by touching a contaminated surface such as a gym floor or a pool deck.

Corns and calluses develop only after repeated friction and pressure that results in the formation dead cells on the skin’s surface. Corns appear on irritated toes whereas calluses develop on palms of the hands and soles of the feet. For most o the patients, corns, and calluses are just a form of the cosmetic nuisance, but to others, it is a disturbing and painful experience that requires medical attention.

Also known as dermatitis, eczema is the inflammation of the skin due to allergies and irritating chemicals. The condition is characterized by redness, tiny blisters, and a continuous itching effect on the skin. When inflammation becomes difficult to manage, the following symptoms are visible. 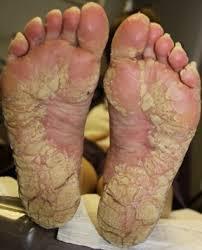 Many forms of this condition do not exhibit any signs and are completely painless. However, the presence of corns, calluses, and warts signifies lots of discomfort.

With follicular hyperkeratosis, it presents with features like excessive development of hair follicles and keratin that result in rough, elevated papules that are cone-shaped. The papules are clogged with some white plug made up of encrusted sebum.

The skin thickening in the case of hyperkeratosis involves the outermost layer or part of the epidermis, also known as stratum corneum. The condition may be caused by chronic exposure to arsenic or deficiency in vitamin A. Medications that inhibit B-Raf such as Dabrafenib and Vemurafenib may also cause the skin disorder. The treatment usually involves use of creams containing urea that help to break up the intercellular matrix within the cells of outermost epidermis layer or stratum corneum. The dissolving or breaking up causes desquamation of scaly skin, and the result is a softened hyperkeratotic skin.2

This is a skin disorder that is congenital, implying that it occurs at birth. It’s also referred to as bullous ichthyosiform erythroderma and is an odd skin disorder that falls under ichthyosis. An affected baby may have reddened skin or erythroderma and pretty severe blisters. Usually, babies having the disorder miss the protection offered by normal skin, and it means they are at risk of getting dehydrated and suffering from skin infections or infections on the other parts of body, something known as sepsis. The blisters tend to be less frequent as the person gets order. Also, erythroderma or reddened skin becomes less evident. 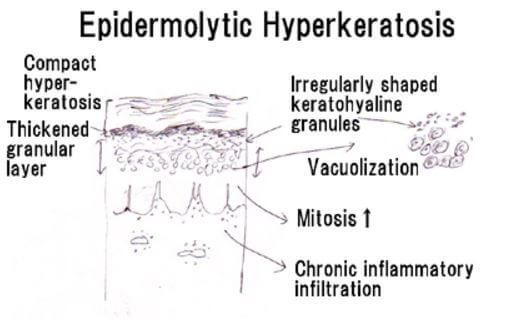 With age, the skin becomes more thicker something known as hyperkeratotic and this is seen over joints, and parts of skin that get in contact with each other. The thick skin may form on neck or scalp and it’s usually darker compared to the normal color. It is likely that bacteria will grow on the individual’s affected or thick skin and begin to cause odor.

Epidermolytic hyperkeratosis is thought to affect about 1 person in every 200,000 to 300,000 individuals. It is caused mainly by mutations occurring in KRT 1 and KRT10 genes. These genes are responsible for providing instructions for the synthesis of proteins referred to as keratin 1 and 10. These proteins are found within the keratinocytes in the epidermis. The keratin protein provides strength as well as resiliency that is needed by the epidermis. When there is mutation of the keratin 1 and 10, it causes changes in the proteins thus preventing the formation of strong, stable filament networks within cells that is needed for stability and strength of the epidermis.4

In dogs, hyperkeratosis can occur and it’s commonly referred to as “hairy dog feet.” The reason it is given the name “hair dog feet” is because it appears as though the dog has abnormal hairs growing on the skin. The dog may have a lot of pain, and the disorder may be occurring because of an underlying cause. A veterinarian should be consulted when your dog presents with this condition.3,6

Canine hyperkeratosis involves the thickening and hardening of the dog’s paws and nose skin. There is no cure for this disorder, however, there are ways you can prevent your canine from developing hyperkeratosis. The condition occurs because of the formation excess keratin. The types of the skin disorder in dogs are nasal hyperkeratosis that forms on the nose, and paws or food pad hyperkeratosis that develops on the paws of the dogs.

The skin may dry out and look callous. If there is cracking of the skin, there may be an infection. The disorder is genetically related and occurs within the first year of the life of the dog. Hyperkeratosis in dogs could be a symptom of another condition such as canine distemper, zinc responsive dermatosis, pemphigus foliaceus, or leishmaniasis.3,6

Depending on the visible symptoms of the condition, the doctor may inquire whether you:

In essence, the doctors can diagnose the condition using one’s medical history or visible symptoms on the skin such as warts, corns, and calluses. If the disease is allergy-related, an allergy test can be convenient to test for chronic eczema.

In other instances, a biopsy, which entails the removal of a body tissue and examining it in the laboratory is carried out to test for the condition. If you doctor suspects the presence of actinic keratoses, a skin biopsy is necessary to confirm the presence of the disease as well as a rule out the development of skin cancer.

If a child suffers from hyperkeratosis, the doctor will need to review the entire family to determine whether the condition has been inherited.

The treatment method applied heavily depends on the cause.

Constantly use a moleskin on areas surrounding the affected areas to decrease pain. Also, make sure always to put on the appropriate footwear to avoid further friction.

Warts can be removed by specialized healthcare professionals using the following methods:

Repeated treatments are sometimes necessary in case the treatment does not reach the targeted layer of the skin that is infected by the virus.

The condition can also be treated using home remedies. However, the results are not as useful as when handled by a medical practitioner. It is advisable to adopt home treatment remedies only after treatment by a medical professional to enhance quick recovery.

This applies in particular in the case where the warts are either broad or deep than normal. Patients with poor circulation or diabetes should be treated by doctors to avoid further infections or injuries.

This condition is best treated by applying corticosteroid cream or ointment. Moisturizing the skin is another means of speeding the healing process.

For a single actinic keratosis, your doctor might prescribe cryosurgery. However, in a case of multiple keratoses, peeling of the skin through laser therapy and dermabrasion is the most appropriate method of treating hyperkeratosis.

The condition is best treated with cryosurgery or using a scalpel.

There is no known cure for this particular condition. The doctor may suggest treating largely affected areas by rubbing special emollients into the surface of the skin

Some form of the disease are easier to treat than others:

Corns and calluses can be conservatively dealt with by wearing comfortable shoes.
Plantar warts can be avoided by ceasing from walking barefoot in pool areas, gyms, or locker rooms.
Chronic eczema can conservatively control by avoiding:

Most forms of these conditions have a good prognosis. However, actinic keratoses can develop complications such as squamous papilloma cell skin cancer. 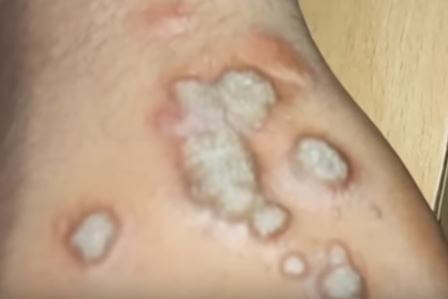 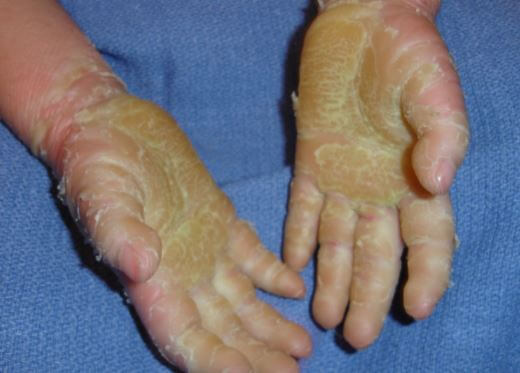 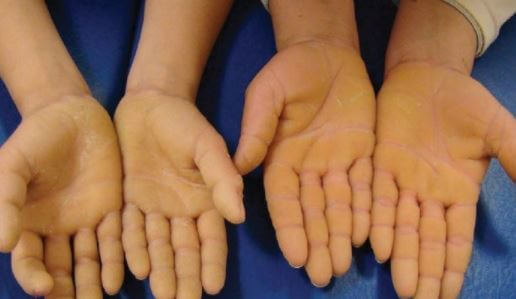 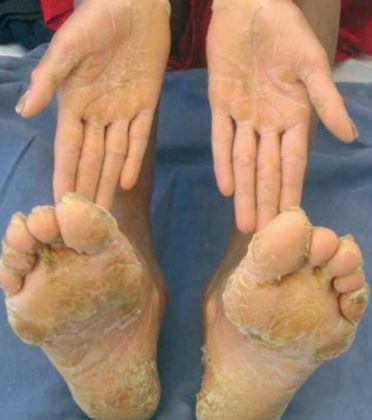